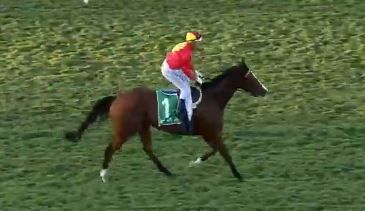 The enigma that is Surprise Bullet, tested the patience of all those involved with the galloper again at Eagle Farm today, however, as the old adage goes – all’s well that ends well.

Proving difficult to load, Suprise Bullet was finally locked away into the outside gate, riderless and with the full army of gate attendants urging him, in.

When the gates opened, Jockey Brad Stewart allowed Suprise Bullet to find is own position, settling at the rear of the field, a positioned he maintained until the field bunched heading into the home turn, at which time, Stewart began to take closer order and eased away from the fence, ready to make his run in the straight.

It wasn’t until well in the straight that Suprise Bullet got the outside of the field and with 200m to run, he still had three to four lengths to pull back.

Inside the last 100m however, the 4yo gelding showed what he is capable of, launching late to arrive right on the line and get his nose down on the line.

It was Suprise Bullet’s third win from fifteen starts, to go with his six placings.

Trainer B. Lockwood advised that the gelding would be ridden in a forward position if circumstances permit. Proved very difficult to load. Trainer B. Lockwood was advised that the gelding would be required to trial to the satisfaction of stewards prior to racing again. After being moderately away from the wide barrier the horse raced in a rearward position. Inclined to lay in when attempting to shift wider on the track passing the 300m and became awkwardly placed at the heels of SAWTELL. B. Stewart was reprimanded for excessive use of the whip prior to the 100m.